A Formula-style steering wheel with integrated screen. In addition, a front plate made of carbon, a housing made of aluminum and rubber grips. Is it really possible to combine all these features in a steering wheel for 500€ without making massive compromises? This review will show in which areas the steering wheel excels and where there might still be some room for improvements.

The steering wheel can be ordered via the manufacturer’s website and various dealers in Europe. Directly from Leoxz the following prices are quoted excluding shipping and taxes/customs:

The European stores currently charge around 500€ for the version with paddle shifters. The surcharges for the dual clutch and the paddles option vary slightly depending on the store.

Note: The steering wheel tested here was provided directly by Leoxz. There was no influence on the review. There were also no requirements regarding the content of the review or the time of publication.

The scope of delivery is kept very simple and apart from a quick guide and an Allen key, you will only find the USB spiral cable and the two sticker sheets that can be used optionally.

Leoxz has come up with some clever ideas when it comes to compatibility. Firstly, the steering wheel can be operated completely independently of the Wheel Base with the USB spiral cable. This is done by plugging it into the designated port on the steering wheel and connecting it directly to the PC. Due to the short length, it is sometimes necessary to use a USB extension. Due to the 70mm hole ring used, almost any Quick Release can be used for this, only a part of the steering wheel must be dismantled for installation.

The second option is to operate the steering wheel via a Bluetooth connection. The required power is then provided via separately available adapters directly via the respective base, the cable can then be avoided completely. Currently, there are adapters for the following manufacturers (not included):

The QR also acts as an emulator for Fanatec, so you don’t have to use an additional Podium hub. This was only possible for the CSW at the time of the review, but support for CSL-DD as well as Podium DD1 and DD2 is expected with a firmware update.

The XF1-Sport has a variety of function keys:

At the back of the steering wheel are six places for the shifters, the dual clutch and two additional analog axes. These are all equipped with Hall sensors and did not have to be calibrated separately during the review.

pressure point and a very short travel. However, the positioning could have used a bit more distance (in depth) to the steering wheel grips, especially for people with larger hands. If necessary, you can quickly remedy the situation with spacers and slightly longer screws.

The other axes can be configured as follows:

The 4.3-inch display used is of course the most eye-catching feature of the XF1 Sport. With 60 FPS and a very good viewing angle, the information can be read very well, and input lag was also not noticeable during the test.

The installed LEDs are divided into three groups:

Note: To use the display with 60 FPS you need a paid license for Simhub: https://www.simhubdash.com/get-a-license/

For the software, Leoxz fully relies on Simhub, which supports all current simulations. You can currently upgrade the firmware and configure the RPM LEDs via the in-house plugin.

It would be nice to be able to make more settings via the software in the future, for example setting the function or color for the side LEDs.

The materials of the XF1-Sport from Leoxz are a real surprise. A 5-millimeter-thick carbon plate is used for the front and the casing is completely made of aluminum. The grips are cast from a flexible polymer and thus provide an extremely good grip. Wear was not visible here even after a few hours of driving. The excellent choice of materials is completed by shifters made of aluminum, which were fitted with carbon plates in addition. However, the USB spiral cable can’t quite keep up with the well-crafted steering wheel; there are higher-quality alternatives from other manufacturers. There are also more expensive counterparts for the buttons, but they are far outside the reasonable price range.

With a weight of less than one kilo (without QR) and a diameter of 275 millimeters, the steering wheel is definitely an option for weaker wheel bases.

There were no complaints in the practical testing on the racetrack. As already mentioned, the steering wheel felt very good to hold and all features functioned smoothly. The free space around the thumb could be a bit tight for driving with gloves in combination with large hands, but there were no unintentional activations of the thumb encoders during the review.

Flex was not present during the ride, even with high force feedback. There are also no complaints about erroneous inputs or missed shifts.

Rarely has a steering wheel surprised as positively as the XF1 Sport from Leoxz. The so far relatively unknown manufacturer delivers an extremely convincing performance with their 275 millimeter Formula-style steering wheel. Starting with an integration into Simhub that still needs some fine-tuning, you’ll get a steering wheel with extremely high-quality materials and a wide range of functions. The display will be a main criterion for many buyers and also convinced in our review.

All in all, the steering wheel offers the best price/performance ratio of all tested steering wheels so far and is thus naturally a recommendation, which could turn out even better with further firmware upgrades. 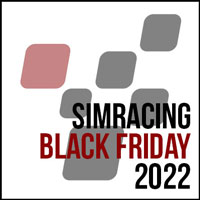